The true story of the time Tim became the first and only person to row the English Channel, the busiest shipping lane in the world, in a bath.

All At Sea is a celebration of the epic absurd, an attempt to explain just how out of hand things can become from a very simple starting point. The book follows the author's death-defying 200-mile journey in his antique Thomas Crapper bath - not just across the Channel, but around Kent - right up to the tremendous reception and huge media attention which awaited him under Tower Bridge. Tim met the Queen, and his bath now resides in the National Maritime Museum of Great Britain.

"a tale of discreetly exotic incidents"
- The Independent.

"almost a mythical figure...the man can clearly write as well as he can row...a crackingly entertaining read"
- Chortle

"Did I mention by the way, that I am sitting rowing in a bathtub?" 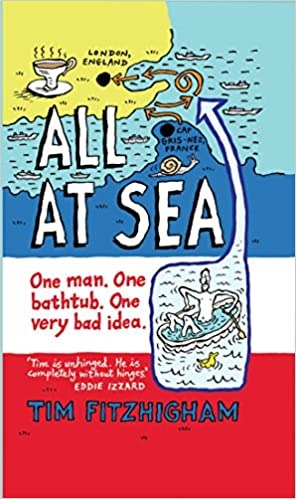